Lesbians Who Tech is a community working together to promote the visibility and inclusion of women, LGBTQ people, and people from other backgrounds under-represented in technology. Founded originally in San Francisco by CEO Leanne Pittsford, Lesbians Who Tech now has over 25,000 members around the world helping to boost representation among LGBTQ women in the tech sector globally through annual tech Summits in New York, San Francisco, Mexico City, Paris, Singapore – and now London.

The Lesbians Who Tech + Allies Summit in London brought over 150 lesbians, queer women + allies across all areas of technology together at our new UK Head Office in Shoreditch, East London. 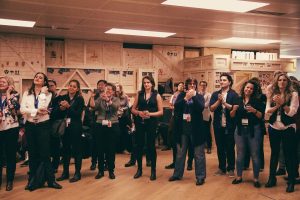 “We’re proud to demonstrate our support for diversity at Amazon by hosting the first London Summit for Lesbians Who Tech,” said Christon Mallett from the UK glamazon Board who’s also a member of Lesbians Who Tech. “It was great to hold an event amongst a mix of people being authentically themselves, accompanied by some really talented artists. To see our community celebrated in my work environment is a privilege and we look forward to continuing to develop a safe space for all into 2018”

Amazon has a strong relationship with Global Lesbians Who Tech, having previously been headline sponsor for the 2017 Lesbians Who Tech summit in San Francisco, with many key Amazon leaders giving inspiring and engaging talks during the event.

Lesbians Who Tech in London added “As a long-standing partner of Lesbians Who Tech, it’s fitting that Amazon hosted our first London summit. The space, entertainment and employees helped to create a welcoming and memorable event for our attendees, with a real buzz. Thank you to all involved at Amazon for assisting us in our aims to provide a platform for LGBT+ women and gender non-conforming people in the Tech industry.”

Click here to view the agenda of the London summit and click here for more information on Lesbians Who Tech.